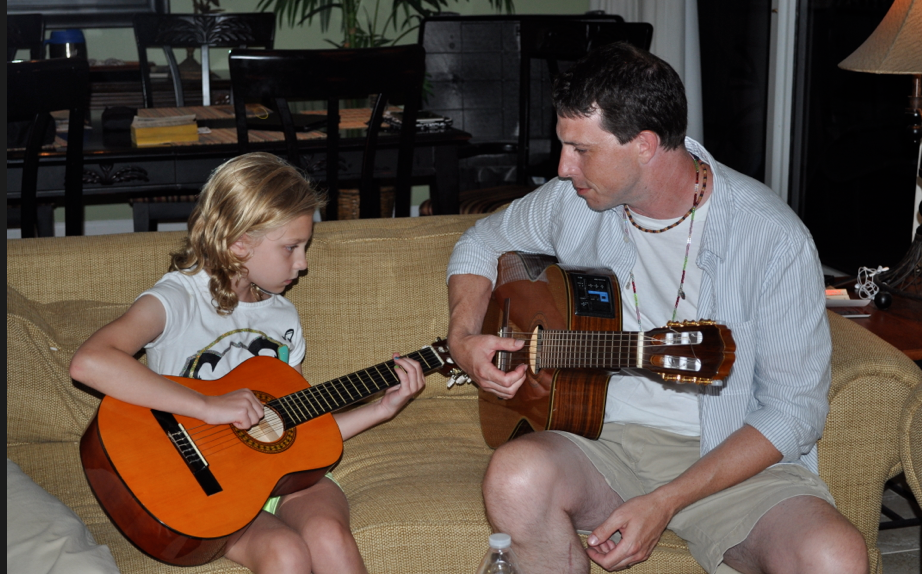 Did you ever want to learn to play the guitar? 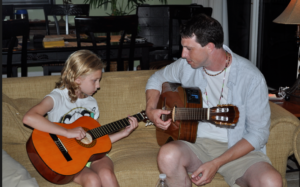 Well, I did. And not just a little bit. I wanted to learn to play the guitar really, really bad.

I didn’t exactly grow up in a musical family so it was a little out of the ordinary for a kid around there to be curious about music. Let alone actually want learn how to play an instrument. The instrument I wanted to learn was the guitar.

It started at around the age of eight years old. I told my mom that I really wanted a guitar. It went something like this…

“Dear Mom, can I have a guitar?” And do you know what she said? “No. Why would you want one of those things?”

So the next year, around age nine, I tried again.

“Dear Sweet Mom, can I have a guitar please?” No again.

“Dear Sweet and Kindly Mother, can I pleeeeaase have a guitar?” No guitar that year either.

“Dear Sweet Mom, Angel from heaven that you are, so giving and desiring all good things for your son, may I please, please have a guitar?” You guessed it. No guitar for me.

This had been going on for sometime. I was basically listening to my music collection and playing a tennis racket in the mirror. Why did I have a tennis racket? I didn’t play tennis nor did I want to (nothing against tennis players). I want to be a guitar player. I could feel it deep down in my soul. This was my calling and I wouldn’t give up.

I also had since learned that my grandparents and their brothers and sisters played. Not only that, they were multi-instrumentalists whose own father had put them to work as kids playing on the bandstand for square dances, barn warmings and house parties! Also, a few of my friends were becoming interested in learning to play too.

We wanted to start a band. No instruments but we had a band. We get together in the shed with anything that would make a sound and tape record improvised songs. My buddy, Eddie (who is now a professional songwriter) would just make up lyrics on the spot! Classic tunes like “Nerds Rule” and “Gone with Gungadin”.

Ed’s brother had broken guitar that was missing some strings. Perfect! We had a toy train that would make a whistle sound. We’d basically clap along and we must have had some drum sticks (no drums of course).

No guitar in the school band. That was fine. I’d take just about anything at that point. I’d like to maybe play the drums but I’d take the sax or even the trumpet. Still some of my favorite instruments to this day.

They let me join the band! I got a snare drum and a bell kit. Everybody hated having to learn to play the bells, but hey we were in the band.

The next year, 7th grade and 12 years old I went back to the routine.

“Dear Sweet Mom, whom I love and who always looks pretty, can I please, pretty please with sugar and spice and everything sweet, please can I have a guitar?”

Do you know what she said? “You know I think this kid wants to learn to play the guitar.”

YES! Right! A thousand times YES! She heard me. I think my dad was just sick of hearing about it and said just go get him the guitar.

One of my super cool uncles had one for sale. We went out that night and got it. A black les paul lotus guitar, chip board case, peavey amp with a 12 inch speaker and I think he even through in a Journey song book.

That was the day I became a guitar player and I have never looked back.

Finding music lessons, especially guitar lessons wasn’t easy in my little town. Luckily, I had a couple of cousins that could play and they got me started. Even my dear sweet Grandad got into the action. I have some great memories of those early guitar lessons.

A little later, come to find out, my school band director played what he called “folk guitar”, finger style on a nylon string. Sounds cool to me. $3 a half hour for him to show me what he knew. I wanted an HOUR guitar lesson! 6 bucks though he was worried my tender little fingers would get sore in an hour. I manned up.

I’m very grateful for those guitar lessons with Mr. Walker. He taught me to read. Though it would be several more years before I truly became a “music reader”. One of the most important things I got from him was that he made me learn to play with my fingers AND with a pick. That early training served me extremely well. He also gave me a chance to play the guitar whenever it was an option. At church, at school, he even created a stage band for us, let us jam in the band room and let us order all kinds of music supplies from the school catalogs. That’s where I ordered and paid for my very own, new electric guitar.

He also knew when it was time for me to go on to another teacher. Having showed me what he knew, he helped me to find the best guitar teacher around. Luckily, we found him in a student from the local college. Lessons were now $5 per lesson but the level of play was a lot higher. This teacher was closer to my age, he knew about all kinds of rock and jazz even. He put me to work filling in for him on a theatrical show! He played me great recordings and introduced me to guitar magazines. He was cool. His band even came over to hear our band and give us some pointers. The didn’t have to do that. All very supportive and encouraging. 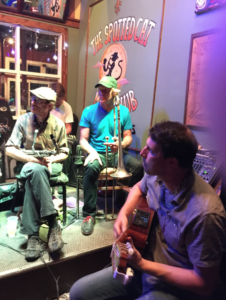 My early guitar experiences were formative. The array of guitar lessons that I received from family, friends, educators and mentors was invaluable. I learned more in those early years than I probably have since. Sure the music is harder, the bar is higher, the technique is stronger, the academics are more ingrained. But it was the explosion of fun and learning that I had in those days that really made me the guitar player I am today.

Sure, I went on to study with many more great teachers at university, in the community, at home and abroad. I’ve learned a lot by being a guitar teacher and giving 1000’s of lessons over the years. 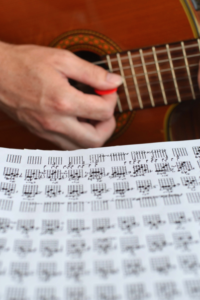 I’m forever grateful to the amazing cast of people who were so encouraging and inspiring in those early years.

Most of all, I have to say, I’m grateful to my mom. She didn’t give in right away. If she had, maybe I wouldn’t have appreciated that first guitar as much. She delayed a little gratification and by doing so instilled a burning desire in me that grew even more intense.

Thank you, Mom. And thanks to the many amazing teachers I’ve had (and still have) over the years. I’m still committed to learning. I still practice everyday.

I’m my own guitar teacher now. Lots to learn. After all of this, I’m a qualified encourager. I’m an advancing guitarist. And I want you to learn to play the guitar too. Great teachers are around us. It’s never to late to start.

If not the guitar for you, then maybe the drums or the sax! Music lessons build character. Music builds relationships.

I’m a hustling musician and family man. I love to learn, play, share and encourage others in music. We’ve got some cool bands (including Soca Jukebox) and I am the director of the St. Joseph Arts Academy. This is my Blog!
www.jasonriley.com
www.stjosephartsacademy.com